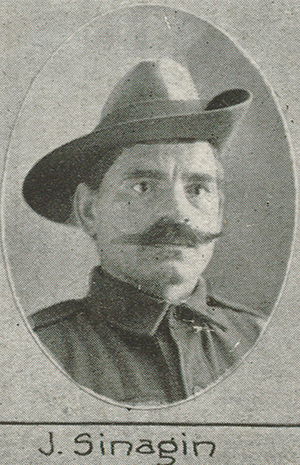 Gregory Smagin
Queenslander Pictorial, supplement to The Queenslander, 29 May 1915, p. 23

Arrived at Australia
from Far East
on 16.10.1914
per St Albans
disembarked at Brisbane

Naturalisation 1923 (file was not found)

Application for admission of relatives (NAA)

[...] It seems that only two of the Russians -- John Wagin, an articulate champion of workers' rights, and Gregory Smagin, who spoke through an interpreter -- managed to make the military listen to their arguments [about their discharge after Russia's withdrawal from the war]. Instead of deserting, they paraded themselves to their commanding officers on 29 July 1918, but were both arrested. The two men served in different units of the 4th Division, and probably coordinated their actions. [...] Smagin fought with the 15th Battalion at Gallipoli and then re-qualified as a gunner, and had a spotless record of service with the 4th Division Ammunition Column. To his commanding officer, he said: 'British fight Russia. I fight no more for the British. Smagin finished soldering.' On being interrogated, he stated that his wife in Krasnoyarsk received no assistance from either the Australian or Russian governments and argued, 'I consider I should obtain my discharge under the circumstances surrounding the fact that Russia has made peace with Germany. I also understand that the British in the Russian Armies have been discharged.' Smagin was put under close arrest while his commanding officer made enquiries at divisional headquarters. [...]

[...] At the end of August [1918] Smagin was transferred to England, without trial, for return to Australia. His case set the ball rolling: a month later four other Russians, from 4th Division artillery units, were also sent back to Australia 'on account of Russian nationality'. They were followed by another five men from different units, sent back under the same rubric; though sometimes it was recorded as 'other reasons' or 'family reasons'. There are some familiar names among them: John Wagin (who had just been sentenced to six months' imprisonment with hard labour), Michael Osipoff (who had earlier wounded himself), Alexis Kazakoff (who some months previously refused to serve as a gunner), and Justin Glowacki.