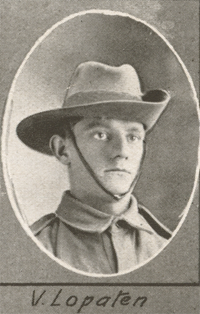 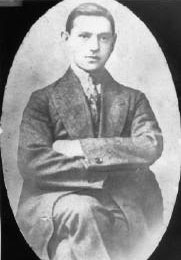 Arrived at Australia
from Harbin, China
on 24.01.1913
per St Albans
disembarked at Brisbane

Ron Lopaten, reflecting on his father's escape from Russia in 1913 with four other 20-year-olds, says: 'I am not sure why he came to Australia, ... they all decided to take off for some specific reason, either for adventure or to get away from something. The only thing I can guess is that he did not want to end up in the czar's army. He did say that there were signs on the parks which said "No soldiers or dogs allowed". He did mention that. I guess in 1913 the Russian army was not very well treated or not very well paid.'

[...] 'My father never mentioned anything about Gallipoli', Vladimir Lopaten's son says, 'other than the fact that when he was wounded he was laying sandbags, and he was bending over, laying down a sandbag and he was shot by a sniper, the bullet passed through his lung, just missed his heart, came out his back and then the bullet hit a New Zealander in the bottom! So the New Zealander was jumping up and down.' Russian Anzacs seemed to be able to see the funny side of things even when in mortal danger, just like their Australian comrades did.