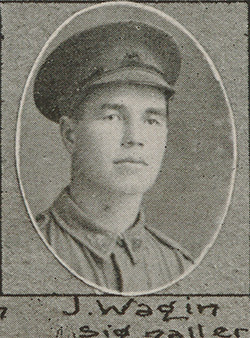 Arrived at Australia
from Vladivostok
on 18.07.1913
per Kumano Maru
disembarked at Brisbane

It seems that only two of the Russians -- John Wagin, an articulate champion of workers' rights, and Gregory Smagin, who spoke through an interpreter -- managed to make the military listen to their arguments [about their discharge after Russia's withdrawal from the war]. Instead of deserting, they paraded themselves to their commanding officers on 29 July 1918, but were both arrested. The two men served in different units of the 4th Division, and probably coordinated their actions. In evidence to his court-martial Wagin (49th Battalion) stated that he was refusing to go on parade until his application for discharge, lodged four months previously, was attended to: 'The private soldier never gets those applications through. In spite of Regulations he has no rights', he explained to the court. 'I enlisted in the A.I.F. because of a Treaty between my Government and the British which compelled me as a Russian subject to enlist for active service. Now my Government is no longer a belligerent I wish to withdraw from the A.I.F. ... My brother was killed on the Russian Front, my wife died in Russia and she left a child with my mother and father who are over 70 years of age and cannot look after themselves. ... The present position is: I cannot support them, I can get no help from either government and I cannot get my discharge to help them.'

[...] Aboard the troopship on his way home, in February 1919, John Wagin wrote a letter to a friend in Russia, which was intercepted, too. In it Wagin commented, 'the English Government has stopped all correspondence with Russia, and amongst them also for us soldiers. Of course this is not fair, but what can you do with those donkeys, the English? They are idiots worse than the Negroes, and their Government, headed by Lloyd George, will go much further than the late Romanoffs. Thank Providence that the war has finished now, and with it we and others can fix up with them home accounts.' Wagin's sympathies lay with the radical wing of the Russian community -- before the war he was secretary of the Mount Morgan section of the Union of Russian Workers -- despite all of which he continued to serve honestly in the AIF for as long as his political convictions let him. Back in Australia he came under the Intelligence branch's notice as a member of a 'vigilance committee of Bolsheviks' and was even on the deportation list in 1919. Amazingly, he was naturalised without a hitch in 1922, probably because the local policeman at Maria Creek (near Silkwood, Queensland), where he was farming, was unaware of his political sympathies. But the authorities took revenge later. According to his children: 'He kept diaries. He had two leather-bound diaries, they went through the First World War. They were seized by the federal police and confiscated back in late 1950s somewhere, it was in Ekibin [Brisbane]. You know, in that time -- reds under the beds, and all that; that horrible time ... We went through a very bad time here in Australia, because, even as Russian descendants, you weren't liked if you mentioned it. But those times are past -- isn't it great.' Wagin's ASIO file has only a reference to him as a 'harmless' communist. The diaries, unfortunately, have disappeared without trace.