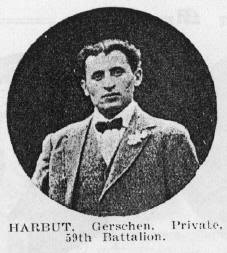 Arrived at Australia
from London
on 9.07.1910
per Wilcannia
disembarked at Adelaide

The three killed [at Sugar-loaf salient in July 1916] were Boris Soans from Estonia and Arthur John Savolainen from Finland, both former seamen, and Gershun Harbert, a Polish Jew. Harbert, a former tailor, had fallen sick on Gallipoli; then in Egypt, when his division made its infamous three-day march across the desert in full kit, he suffered heat-stroke. Despite his poor health he went to the Western Front, where he lasted only a few days. During the attack his 15th Brigade was in the worst position and had to cross the widest part of no-man's-land under the German tempest of fire. Harbert found his end somewhere there among its ditches and furrows. He was reported 'missing in action'. We shall never know what made him join the AIF, probably devotion to his new homeland. A human grain of sand, doing his bit ...