During the First World War over a thousand Russian-born servicemen enlisted in the Australian Imperial Force (AIF). They were the largest national group in the AIF after British, New Zealand and Canadian born servicemen. Besides ethnic Russians, these Anzacs included members of a score of different ethnic groups born within the borders of the Russian Empire. Their story is told in my book: 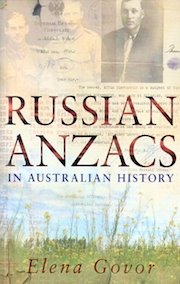 This site provides additional information about each of the Russian Anzacs, as well as statistical and other data. There is a page for each of these servicemen, containing biographical and service details, as well as links to further materials such as archival documents, newspaper articles, photographs, and quotes from books. In many cases these sources have been digitised and are available to view online.

New book! Falling Stars: The story of Anzacs from Ukraine continues the story of the Russian Anzacs. Read more about it here.

Centenary of the First World War

To mark the Centenary of the First World War, this site will, in a weekly blog post, celebrate the Russian Anzacs who enlisted in the AIF that week. Their pages on this new site will be updated with the latest available sources and materials.

Read more on the blog