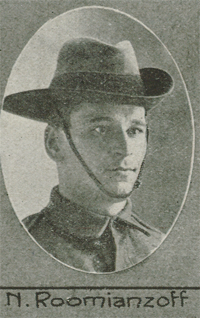 Nicholas Roomianzoff
Queenslander Pictorial, supplement to The Queenslander, 22 May 1915, p. 23 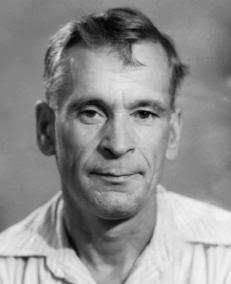 Arrived at Australia
from Far East
on 24.02.1914
per Alderham
disembarked at Brisbane

[...] The file of Nicholas Roomianzoff provides an opportunity to jump 20 years ahead to see what became of one of these vagabonds. When Roomianzoff came to Australia via the Far East as a young man, he worked as a labourer until enlisting in April 1915. At Gallipoli he got sick but recovered and rejoined his unit there; subsequently, on the Western Front, he was wounded twice (at Mouquet Farm and Dernancourt), on each occasion rejoining his unit. At the end of the war, after his discharge, he moved to the Mackay area and did railway construction work, shifting from place to place. By the beginning of the Second World War he is still at Mackay but had not become naturalised and, as an alien in war-time, had to register with the police again: his occupation at that stage is recorded as 'waterside worker'. In 1939 he moved to Darwin, back to Mackay, to Townsville, to Mackay -- back and forth, repeating the same pattern again and again. From his photograph of that year on his registration form, on which his fingerprints are also impressed, a tired-looking, withdrawn man gazes out at us as if saying, 'You don't trust me -- what do I care'. The last trace of him that I can find is at the Good Samaritan Hospital in Cairns, in 1968.