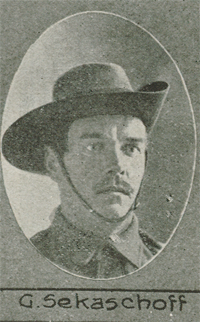 Arrived at Australia
from Russia
on 28.12.1913
per Empire
disembarked at Cairns, Qld

Russians who joined the army together, or who met up at training camp, would often embark together. [...] The Karoola, which left Brisbane on 12 June 1915, carried eight Russians mostly from northern Queensland: Glowacki, Roomianzoff, Sekachoff, Karelin (6/9th Battalion), and Lopaten, Grehoff, Smagin and Volkoff (6/15th Battalion). In Sydney they were joined by three of their countrymen --Kozakoff, Harbert and Kozakovshonok.