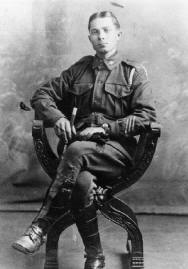 Residence before arrival at Australia Was in Manchuria for 2 years

Arrived at Australia
from Japan
on 10.04.1912
per St Albans
disembarked at Cairns

Residence after the war Port Douglas, Innisfail and district

Some underwent their Australian baptism with back-breaking toil on the cane-fields. When Nicholas Korotcoff arrived at Port Douglas in 1912 with his six fellow deserters from the Russian army, they were all recruited by a Mossman cane-farmer, Mr Crawford. According to Nicholas's son, Crawford 'used to call them "these seven Cossacks" and told how they got drunk and the ship sailed without them and that he put them to work on his cane-farm ... . They lived in the little old tin shed there' -- which remained Nicholas's home until war broke out and he rushed to enlist.

[...] Belonging to the Anzac tradition was at the heart of their sense of belonging to Australia. Nicholas Korotcoff 'never missed an Anzac Day Dawn Service, or parade', his daughter said, 'and the night before he'd sit polishing his medals to wear next day. I have those WWI medals now and they still have the original ribbons on them. That was his "Day", and he spent it with his mates, men who'd also served in the war. Peter Harper, Bunty Draney and Cock White were his special friends. ... After a few drinks he'd often sing a few WWI songs. The words had been changed of course, and we learnt them too, but one song was never allowed -- "Mademoiselle From Dickey Bush". We never heard that song right through.'