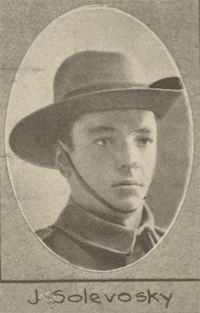 Arrived at Australia
from Far East
on 25.03.1914
per Kumano Maru
disembarked at Townsville, Qld

[...] William Kolesnikov, from Peretin in the Ukraine, had [...] horrific wounds [at Polygon Wood, 1917] -- as well as wounds to his left arm, his jaw and mandible were fractured and his tongue was shot away. Yan Soolcovsky, a Gallipoli veteran who had been wounded previously at Mouquet Farm, now lost an arm at Polygon Wood. In 1920 he died in Brisbane with his fiancée at his side. Was there anybody to look after Kolesnikov? I could find no one.