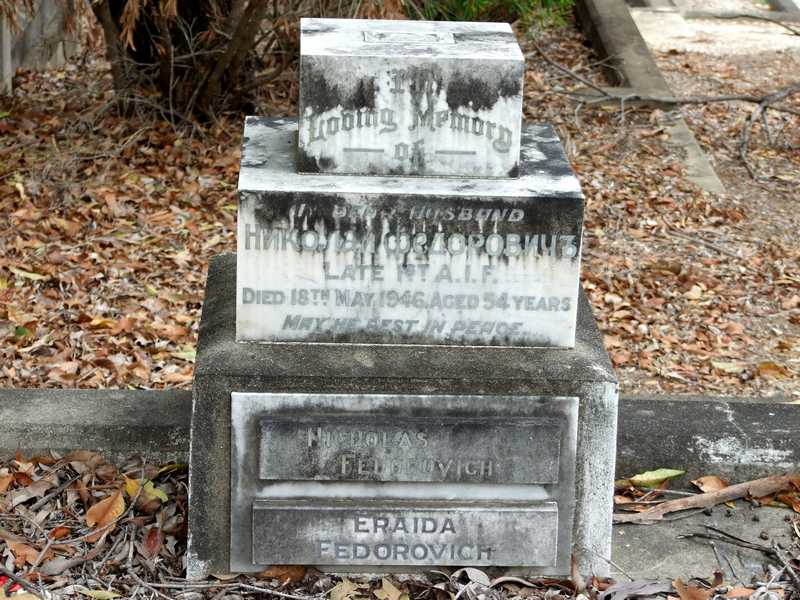 Arrived at Australia
from Russia
on 21.08.1911
per Kumano Maru
disembarked at Brisbane

Offer of services as interpreter (NAA)

At the end of 1915 Nicholas Fedorovich, who was in the 9th Battalion, contracted enteric fever at Gallipoli and was invalided to London. Before being invalided out, he obtained permission from his commanding officer to seek leave, when he had recovered, to go to Odessa and visit his sick mother (Gallipoli was indeed that close to Russia). He obtained leave from the War Office in London, from where he set off to Odessa. 'In his Australian uniform, he was an object of much admiration in the grain city', he told the Cairns Post after the war. When he was in Petrograd on his way back to England, the paper reported, 'the interest he had created in the south grew more and more. Russia was then the most powerful of the Allies, and was driving the Germans back from the eastern frontier. He was followed around by crowds of people. When he entered cafes people rose and greeted him warmly. Groups of people listened with amazement to his stories of the great Commonwealth beyond the seas where the minimum wage for labourers was 8/- a day! The Russian military authorities decided that Fedorovich would be a valuable asset in their army, in imbuing the soldiers with fighting qualities. The news of the Anzacs' brilliant charges at Gallipoli had given them a high opinion of the Australians as fighters, and Fedorovich found himself under orders to proceed to the eastern front. In vain he protested. He had an interview with the British Ambassador, who was unable to help him.' Only after spending several months on the Russian Front did he manage to get back to London and rejoin the AIF, serving as an interpreter.

The assimilation of our Anzacs in Australian society was facilitated not only by their comrades in the army but by women as well. A rare document from Nicholas Fedorovich [...] gives us an opportunity to see the human being behind the clumsy and compressed official records, in which their words were occasionally quoted. Fedorovich's short story, Kismet - fate - was written in Russian, translated by Victor Marsden, the Russian correspondent of the Morning Post, and published after the war in a North Queensland newspaper. It is emblematic that this earliest sample of Ukrainian literature in Australia was inspired by the author's experience on the battlefront with his 9th Battalion comrades.