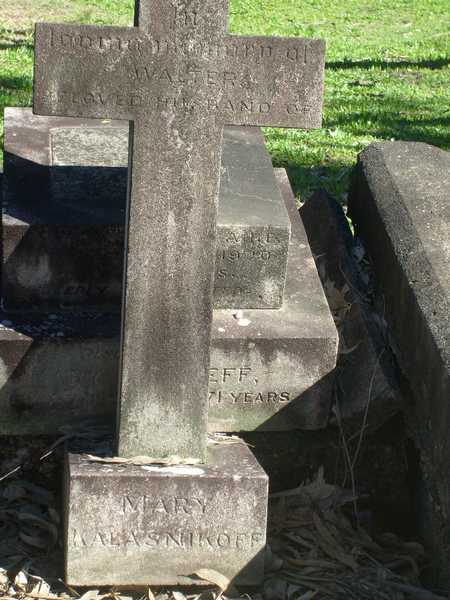 Arrived at Australia
from London
on 31.08.1914
per Star of England
disembarked at Sydney

Kalasnikoff's case was the most tragic of these stories. Originally from the township of Ostrov, near Pskov in northwestern Russia, he had worked on ships as a fireman and his chest and arms were covered with tattoos including Russian and American flags and a variety of designs, many featuring an anchor -- like a plea for protection. Kalasnikoff enlisted in the AIF in 1915 but in 1916, before any of the major Western Front actions took place, was nearly blinded in an explosion at Bois Grenier. Invalided to Brisbane with 75 per cent incapacitation, he struggled on for a while. In 1918 his pension was reduced and he applied for naturalisation, as it was hard to find work without it. His application went through without a hitch and in February 1919 his naturalisation certificate was issued and just about to be mailed when 'fresh evidence' appeared. This new 'evidence' was the Brisbane Censor's report that Kalasnikoff, when visiting the Russian Association in 1918, 'disowned, as a disgrace, his returned soldier's Badge, as it was a sign that he had fought against his German brothers'. Another of his 'crimes' was that a socialist revolutionary, Herman Bykoff (alias Resanoff), who also had arrived in Australia as a fireman, had lodged with the Kalasnikoffs for some time after Kalasnikoff's return from the front. All this was enough for Kalasnikoff to be branded 'a Bolshevik of dangerous propensities' and for his naturalisation to be denied. A constable sent to collect information about Kalasnikoff recorded the opinions of an opponent of his, Leo Berk, who said that Kalasnikoff's 'wife is well known for her Bolshevik views ... Kalashnikoff [Kalasnikoff] is led by his wife. He is not a bad man on the whole, but if Bolshevism attained to any degree of success in Australia Kalashnikoff would certainly come out as a Bolshevik.'

This investigation into Kalasnikoff coincided with the red flag riots -- the worst possible time for a Russian to come to the attention of the security services. After the riots a friend wrote to Kalasnikoff, who was then in hospital, 'I was nearly beaten for speaking Russian -- by Englishmen. We must be as far from Russia as we possibly can. There is danger for the Russians on every step and corner.' Nevertheless, the Brisbane RSL gave him its support: 'Being unnaturalized, he finds it very difficult to secure work'; as well, a Queensland parliamentarian raised his case with the minister for Home Affairs. It was all in vain. Meanwhile, Kalasnikoff's health declined markedly and he was unable to work. He died in December 1920 at a hospital in Corinda, paying dearly for having once enjoyed his freedom of speech in Australia.