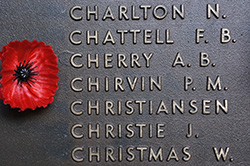 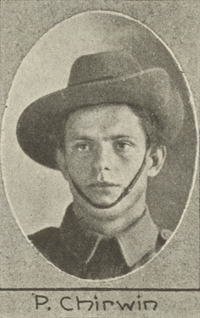 Arrived at Australia
from Far East via Moji, Japan
on 16.10.1914
per St Albans
disembarked at Brisbane

In April 1919 the Sydney Morning Herald reported, 'An inquest was held yesterday concerning the death of Peter Chervin [Chirvin], 26, a native of Russia and a member of the A.I.F., who was found hanging from a beam on the troopship Anchises on April 16 while the vessel was in quarantine. Evidence was given that the deceased was depressed and complained of being "ragged owing to being a Russian". Pte James Roberts said that the deceased seemed to be obsessed with the idea that the Bolshevik movement was strong in Queensland, and he was afraid of what might happen after he landed there owing to Bolshevism. He thought he would be looked upon as a German spy.' At the court of enquiry a more forthcoming Roberts stated that, while during the voyage Chirvin 'was quite cheerful & looking forward to getting to Queensland', he changed after his arrival in Australia: 'Since reading of Bolshevic movements in Brisbane he appeared to be afraid of the Bolshevics when he landed in Brisbane. He appeared to be mentally deranged during the last few days & was apparently under the delusion that he was looked upon as a German spy.'

There were people aboard the Anchises who knew that the emphases in this testimony had been adjusted: it was not the Queensland bolsheviks that Chirvin feared, it was his comrades on board the ship. Chirvin had served four years in the AIF, from Gallipoli to France; he was wounded twice and received a Military Medal for his courage as a stretcher-bearer at St Quentin. The day before his death he went to see Lieutenant-Colonel J.S. Denton, who testified, 'he told me that he was being heckled about his nationality. He being a Russian, his comrades calling him "Bolshie". On this point I tried to obtain the names of the offenders but he refused me the information. He served under me in the 49th Battalion & his conduct was exemplary.' Chirvin also told Surgeon L.W. Bond, in whose care he was at the time, that 'his comrades had subjected him to a lot of "ragging" about his Russian parentage'. He told both Denton and Bond he intended to commit suicide.

Chirvin left behind a widowed mother, a peasant woman, in Vladivostok. In 1916, as he headed for France, he had written to her, 'I beg you once more not to worry too much, I think we shall see each other again'. His mother would never forget him and, in spite of all the difficulties facing her, kept trying throughout the 1920s to obtain information from the Australian military about his 'personal effects' and the cause of his death. All she ever got was his medals and some money. As for the court of inquiry -- the coroner returned a verdict of suicide and no action was taken to find the 'offenders'. They went home, jubilant conquerors, to reunite with their loved ones. Chirvin was buried at the North Head Quarantine Cemetery.