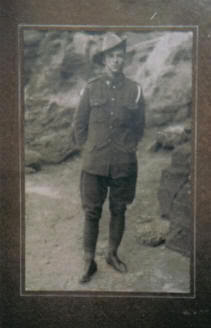 Arrived at Australia together with Bernard Turkulain

Arrived at Australia
from Russia
on 15.10.1910
per Sopernik
disembarked at Port Adelaide, SA

The story of Alexander Hiltunen, a Finnish youth from a well-placed Vyborg family, who arrived as a sailor at Port Adelaide in 1910, must have been typical for many seamen. Hiltunen left his ship and went to Port Elliot, according to his obituary: 'He was unable to speak the English tongue but by making signs to Mrs Trigg of Cliff House conveyed the fact that he was hungry. He seemed young and fresh and the good lady's heart went out to him with the result she treated him as a son, teaching him the English tongue and giving him some experience at a trade.'

The kindly Mrs Trigg brings to mind Basil Greshner's 'old lady' from Winchelsea -- there must have been many who, unsung, opened their hearts to these strangers. The effect of such kindness can be far-reaching; when war broke out Hiltunen felt impelled to repay the debt, but his was a short, tragic life [...].