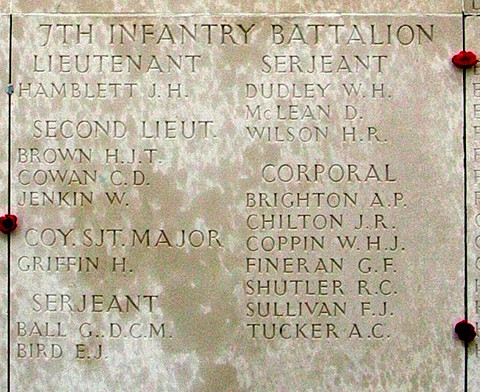 Arrived at Australia
from Antwerp, Belgium
on 21.08.1911
per Seydlitz
disembarked at Melbourne

Our heroes at the front. Letters to friends, Rutherglen Sun and Chiltern Valley Advertiser, 11 June 1915, p. 2

[...] George Ball (7th Battalion), a Russianised Englishman from St Petersburg, became a Gallipoli hero [...]. A month after being wounded during the landing at Gaba Tepe, he rejoined his battalion. On 6 August, at the battle for Lone Pine, he won a DCM (Distinguished Conduct Medal) for 'conspicuous gallantry' and was promoted to corporal -- when the officers and NCOs in his party had all been killed or wounded, according to his citation he 'took command ... in an isolated post, and held the enemy in check until reorganization had been effected'. At Lone Pine, one of the most glorious battles in the history of the 7th Battalion, Lieut. W.J. Symons, Ball's company commander, had '150 men and four officers' under his command; afterwards, 'All but 9 were dead or wounded'. Four of them, including Symons, received the Victoria Cross.

[...] Comrades of the Russian Gallipoli hero George Ball remembered him during that break from the fighting [in Egypt]: 'Off duty at Mena Camp, one would most likely find him a formidable contestant at the boxing stadium or trying his luck at crown and anchor (to do which he'd raffle the mandolin when broke and buy it back on hitting the jackpot). Long ere the great test came, "the Russian" had been accepted as a nice bloke, one with whom you'd hate to pick a row.'

[...] [At the Western Front] fearless George Ball, the Lone Pine hero, took part in a successful raid on enemy trenches along this northern Belgian sector, for which he was awarded a bar to his DCM and promoted to sergeant. In the citation for Ball's new award his commander wrote: 'At Hollebeke on the night of the 30 September 1916 during a silent raid on the enemy's trench No 881 Acting Sergeant George Ball D.C.M. showed conspicuous gallantry. He was the N.C.O. of the left party, and after entering the enemy's trench - came to a dugout where he saw two Germans. He ordered them out - one obeyed, but when he was out he fired his revolver at Sergeant Ball, who jumped inside and shot him, and then shot the other in the dugout. Processing along the trench he encountered a German in a recess and killed him. Further along the trench he saw another small dugout and flashing his torch he saw four Germans. One came out and showed fight, and was shot by Sgt Ball. A bomb was thrown into the dugout and groans were heard.' There was no place for mercy here; it was kill or be killed ... A few weeks later, at Gueudecourt during the new push on the Somme, Ball himself will be killed by a shell.