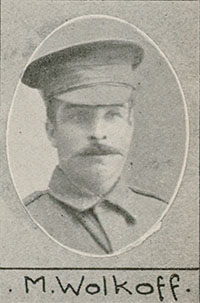 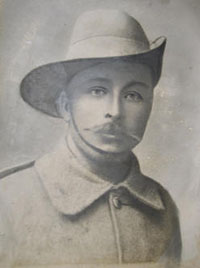 Michael Wolkoff
courtesy of his family 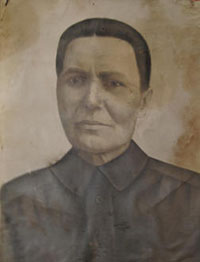 Praskovia Volkova
courtesy of her family

[...] Matrenin, Silantiff and Wolkoff, the three friends who came from Krasnoe to Australia together and enlisted at the same time, had now arrived together at the front in reinforcements to the 26th Battalion sent over from England. Within only a few weeks they suffered their first loss when Michael Wolkoff was killed. On the other side of Europe Wolkoff's wife Praskovia and their son were now without their breadwinner; the October revolution was still a year away but in the meantime Praskovia started to receive a pension from the Australian government. Years later the question of this pension will involve many people ...

[...] At the height of the bitter Russian resistance to the German invader, in 1942, the Australian Legation was established in Moscow as a gesture of support for a powerful ally in its struggle against fascism. The tide had turned but the war was still raging when, two years later, the Legation received an unusual visitor. Peter Heydon, the Legation Secretary, reported what happened. 'Mrs Praskovia Volkova visited the Legation on 26th June, 1944, having walked the greater part of the way from Krasnoe Selo, Gorki oblast, which is between 300 and 400 kilometres.'

Praskovia Volkova was the widow of Michael Volkov (Wolkoff), one of the three friends from Krasnoe whose lives we have followed since they arrived together in Australia, not long before the outbreak of the First World War. Heydon observed of her: 'There was no doubt of her destitute condition and she satisfactorily identified herself by means of passport and certificates from her Village Soviet. She told a pitiful tale of her existence and the harsh treatment she and other unfortunates have received from a Collective Farm Chairman, who appears to be a thorough martinet, and the dictator of the village. Things have apparently been even worse for her since her son went into the Red Army. At the time of the "purges" (1937-38) she was imprisoned, she said, "because she received a foreign pension" but now her condition has been so bad that she decided it was worth the risk to apply for it again. In particular, as she cannot work, Mrs. Volkova is not allowed to have any bread at State prices. If she were granted this right the pension would enable her to survive and accordingly, in hope of helping her, the Legation gave a certificate that she is in receipt of a pension from the Australian Government in respect of her late husband's service in the Great War, incorporating a request that, if possible, she should be granted the right to buy bread at state prices. We also arranged for her to get a railway passage back to her village.'

Until the purges Praskovia Volkova had been receiving her pension through the British consul in Moscow (which had previously been handling such matters on Australia's behalf); since then, however, the arrears had accumulated, amounting to several hundred pounds. Heydon realised that there would be no other opportunity to safely pay such a sum to her and so, without waiting for formal approval from London or Australia, he issued the whole amount in roubles to her. The only evidence for this transaction he could provide to his superiors was the cross Mrs Volkova made in lieu of a signature. For the next three years, until 1947, the Australian Legation took a chance and remitted her pension to the village but doubts arose over whether the money was reaching her, as no one from the Legation could travel to the village to see, and payment was again stopped. In 1947 Praskovia Volkova once more came to the Legation. This time the problem was dealt with by John R. Rowland, the newly appointed Secretary, who arranged with Praskovia that she would sign the receipts for the money with three crosses.