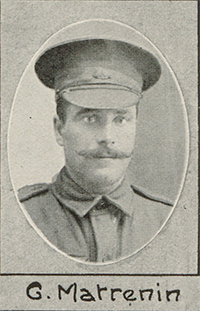 Naturalisation Served as Russian subject; 1949 naturalised in the UK

Application for free transportation to Australia for himself, wife and children (NAA)

Gregory Matrenin, one of the three from Krasnoe village whose lives we have followed through the war, was demobilised in London [...]. Once he'd recovered from his wounds, sustained at Bullecourt in May 1917 he was placed in St Dunstan's hostel for blind soldiers, where he received training in poultry farming and willow basket-making. He applied for his discharge in May 1920, stating his intention was to try to find his wife and two children in Russia, 'who have not been heard of for some time'. I could not manage to find out whether he succeeded in crossing a Russia gripped in the turmoil of civil war, whether he had reached Krasnoe and was able to tell the families of Silantiff and Wolkoff, his friends, about their fate.