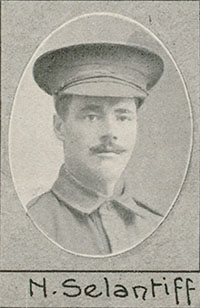 Wife Alexandra Silantiff (by 1923 - deceased) and child left in Russia; in 1945 wife Dana A. and son Ivan N. Silantev

[...] One of those whose wanderings are revealed through the alien registration records was Nicholas Silantiff: of the three friends from Krasnoe village whose stories we have followed through the war, only Silantiff returned to Australia. In February 1917 he had suffered severe wounds to the right arm and both legs, and been left with a bad limp. In late 1917 he was receiving a pension and was lodging at boarding-houses in Brisbane. In August-September 1918 he signed Leo Berk's protest against the bolsheviks. By that time it was obvious his war savings were gone as he went to Mount Morgan and Rockhampton to earn some money on the cane-fields. After two months he returned to Brisbane, where he spent the festive season, before trying his luck in Helensvale, near Southport, in February 1919. He was back in Brisbane for summer 1919-20, and then moved to Samsonvale, near Dayboro, north of the city. By the end of 1920 he had returned to Brisbane yet again for the festive season and, with his money all gone once more, joined a railway gang at Caboolture, north of Brisbane, then returned to Brisbane again before going south to Canungra. By now he must have become fed up with this way of life and applied for permission to return to Russia; it was finally granted in 1923 and he went soon afterwards.