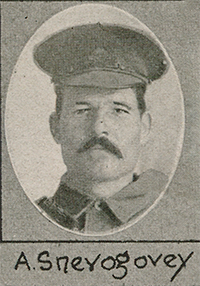 Arrived at Australia
from Harbin
on 3.04.1910
per Kumano Maru
disembarked at Brisbane

The October 1917 revolution and, especially, Russia's withdrawal from the war only increased the determination of some Russians to obtain their discharge, although it manifested itself in different ways: Permakoff's open protest was the most bizarre; several others simply refused to go to the front. [...] Another [...] case was that of Andrew Snegovoy from Odessa (49th Battalion), who enlisted as a motor-driver, had also been wounded twice and had returned to the trenches again; he left his battalion on 12 September 1918, was accused of desertion and sentenced to five years' penal servitude, too. Like the others, prior to deserting he had made an unsuccessful attempt to obtain a discharge, arguing that his family in Russia needed his help.