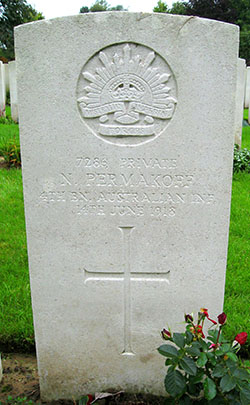 Heather Crosby, Permakoff comes to a tragic end in a a war he did not want, Daily Liberal, 4 May 2015

'About 3 p.m. 13th June 1918 I was on the same post as Pte Bruce. Pte Bruce called out to me "Jack, is that Permakoff?" I looked over the top and saw Permakoff about 50 yards away crossing our wire. He had neither rifle or equipment. I called on him to halt but he did not take any notice. I then heard Lt Grant order Pte Bruce to fire.' -- this was from testimony given by Private Dunlop, 4th Battalion at the court of enquiry.

... A strange deserter, this Russian, who simply cast his weapon away and walked towards the German lines in broad daylight. And when called upon to stop, 'he refused to do so, simply turning his head and increasing his pace'. Yes, he had the courage not to look back, just like the heroes in the Russian fairy-tales of his childhood. But what followed was no fairy-tale but the reality of war: 'I ordered the sentry [Private Bruce] to fire on him. He did so but missed.' Lieutenant Grant, Permakoff's platoon commander, testified. 'L/C Norman shot him from the post on left. Pte Permakoff dropped, but appeared to be crawling towards enemy after he had dropped, so keeping Cpl. Warren with me I went out and brought him in.' Permakoff died a few hours later from an abdominal wound.

Nicholas Permakoff (or, more correctly, Permjakoff) came from the northern Russian city of Archangel and moved to Australia after serving several years in the Russian artillery. When he enlisted in the AIF in May 1916, he was working as a miner. He later alleged: 'When I joined the Australian Army I was told I would be transferred to the Russian Army on reaching England. I do not speak English very well.' In England his transfer was refused, but by the time he arrived in France in November 1917 his transfer was no longer the sole issue: now, he had no wish to fight at all. News had come of the October revolution in Russia, with its slogan 'Peace to the peoples', and of the fraternising that had been taking place between the troops on the Eastern Front, which gave him the idea about what he should do -- put down his weapon. On arrival at Le Havre he refused to 'put on his equipment'. He was court-martialled and sentenced to six months' imprisonment with hard labour. Having completed his sentence, he arrived at the 4th Battalion on 4 June 1918. Sergeant Osmond testified: 'On the night of the 8th I warned the above named soldier to have 170 rounds of ammunition. He said "Don't want any, I won't shoot", and on the night of the 12th I warned him to get ready to move to the front line he said "Sgt. I won't shoot. I won't do anything."' To Lieutenant Grant, when summoned before him, Permakoff said, 'I not shoot on any Germans', and even claimed that one of his parents was German. Lieutenant Grant informed his commanding officer and received instructions 'to shoot Pte Permakoff if he showed any sign of treachery'. There wasn't long to wait.

Following the court of enquiry the Brigade General Officer Commanding expressed the opinion that 'the man who shot Pte Permakoff should be commended for doing his duty'; in addition, Base Records was advised that whatever 'pay was owing to Permakoff was to be 'forfeited to the Crown'. Permakoff's mother in Archangel was never found but, in any case (as the documents stressed) was 'not entitled to a pension'. All formalities had been duly observed ...

The whole incident raises many questions. Why was Permakoff, who from the moment of his arrival in France had consistently declared he wouldn't fight, nevertheless forced into the trenches and given ammunition -- even after claiming to have a German parent? What had driven him to make such an absurdly exhibitionist 'desertion'? Had Private Bruce missed him intentionally? And what about L/C William Norman, who did not miss the target? Norman did not let the slightest hint of his own emotions creep into his well-worded testimony to the court. Probably, the emotions came later ... But can we judge the participants in this tragedy? And how would we do it -- in the context of values of the world at the time of the First World War? or according to the values of our present-day world which has lived through Vietnam and more recent conflicts? Only words of ancient wisdom can ease my bewilderment -- 'Judge not ... Condemn not ... Forgive ...'.