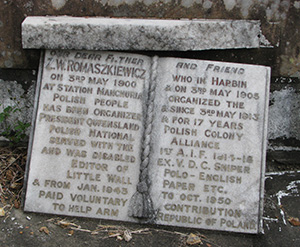 Arrived at Australia
from Nagasaki, Japan
on 3.04.1910
per Kumano Maru
disembarked at Brisbane

Residence after the war Morningside, Qld

Letter to the Undersecretary of the Lands Department, from Private S V Romashkevisch, regarding land selection at Wallumbilla, 23 January 1916 (QSA)

Letter to Private S V Romashkevisch from W Gordon Graham, the Undersecretary of the Lands Department, regarding land selection at Wallumbilla, 26 January 1916 (QSA)

Sigismund Vitold Romashkevisch was another with this dual Russian-Polish background: in Australia his surname was spelled both ways, Russian and Polish -- Romashkevisch and Romaszkiewicz -- and he actively involved himself in both communities. A bag-maker from Kovno (now Kaunas, Lithuania), he also knew Lithuanian. Before the war he was not only involved with the Russian Association, writing in Russian for its newspapers, but was also one of the founders in 1913 of 'Ognisko Polskie', the first Polish Association. He was also president of the Polish Society for over 45 years and his gravestone describes him as having 'organised the Polish people'.

[...] One more regiment formed on ethnic principles had a Russian-Australian connection, too -- the Polish army in France. This was formed in 1917 mostly of American and Canadian Polish volunteers whose aim was to establish a free Poland after an Allied victory in the war. I have not found any cases of Russian-born Poles in the AIF applying for transfer into this army, although Sigismund Romashkevisch provided some interesting facts about an attempt to recruit volunteers for this force in Australia. Romashkevisch was recuperating at Weymouth Depot in early 1918, after being wounded at Ypres, when he 'received an invitation ... from the Representant of Polish National Committee in England - Count W. Sobanski and Represe[ntative] of Polish Military Mission Lieut. J.H. De-Rosen to come to London for a personal discussion and arrangements about recruiting by [him] the Poles in Australia and New Zealand for the Polish Army in France'. On his return to Australia in October 1918 he recruited 44 men but had to dismiss them, 'as the war was over before [he] could send them to the Polish Army in France or to Poland'.

[...] Sigismund Romashkevisch's story is another illustration of this fear of being branded a bolshevik. Romashkevisch returned, physically and mentally devastated, from the Western Front to his wife and three children. His wounds prevented him from continuing with his previous work as a saddler and the family could barely make ends meet living on his pension. He applied for help from the Repatriation Department, which was supposed to provide wounded solders with either financial support or work which they could do. Romashkevisch was obviously the type of Russian who never gave up the struggle for justice. His Repatriation Department file is 'a record of voluminous correspondence', and the most striking thing it reveals is his obsession to prove to the bureaucrats that he is not bolshevik, and not even Russian. To combat any possible suspicion on the part of the officials, he wrote: 'It seems to me that this treatment and slownes with it is only because I am not of English origin or even m[a]y be suspected to be a bolshevick, which (if am realy so suspected) is more dreadfull to me as I can tell. ... I am an most loyal man.' In another letter he wrote that he had experienced 'being suspected to be a "Bolshevick"' and that he was 'dredfuly afriten [frightened] of such suspiciousness'. He even attached a 'certificate from the Polish National Committee in which is stated that I am of Polish origin'.