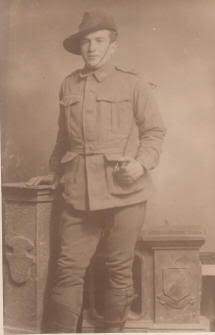 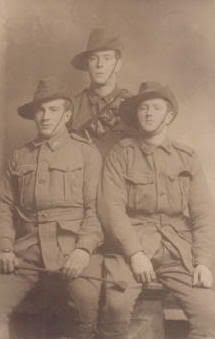 Arrived at Australia
from Port Said, Egypt
on 7.02.1909
per Friedreich der Grosse
disembarked at Melbourne

Occupation 1916 student, studied at Wesley College; after the war worked for Myer Emporium

The University of Melbourne archives

Samuel Ettingove and his cousin Norman (his name was originally Nahum) Myer had been brought out as youths to Australia by their uncles, the Myer brothers, who provided them with an Australian upbringing and education. [...] Sadly, Samuel never ended up fighting for his new-found land, being killed in March 1918, at the age of 21, after only one month at training camp, when his motor-bike collided with a tram.

It is his cousin Norman who gives this family's story its happy ending. He was born, his grandson tells us, Nahum in a shtetl and his father was a merchant who 'died when he was six months old. His mother, with no means of providing for her young family, was forced to marry again -- to a man who proved so cruel that my grandfather as a young boy would at times hide out in the woods till cold and hunger forced him back. His eventual means of escape came with passage to Australia arranged by his uncles Sidney and Elcon.' Life's cruelty left its mark on them all -- the Jewish boy Nahum, the Byelorussian boy Alexander Mike, or all those youths from the Baltic Provinces or Finland forced out of their homes into seafaring. They never talked much about what happened in their lives but never forgot about it either. Nahum became Norman Myer and enjoyed a successful career in the artillery, rising to lieutenant by the end of the war; he inherited the Myer emporium but never spoke much about his rise to the top.

[...] Norman Myer, who joined his uncles' business, the Myer Emporium, is the best example of someone rising to the top. A 1948 profile of him stated: 'Mr Myer says nowadays that his uncle [Sidney] was a hard task-master. He expected him to know everything, to be able to do everything'. Norman started as a salesman, selling women's stockings, but even then he had flair: his first gamble, importing a large consignment of silk stockings into Australia despite his uncle's reservations, paid off magnificently. In the early 1950s he could say: 'I am Chairman and Managing Director of the Myer Emporium organizations which employ, in all, 10,000 people. As retailers, the Myer Emporium Ltd. rates the largest single unit in the British Empire.'

The Myers were known for providing their compatriots with employment, among whom were several diggers -- Michael Nemirovsky was one who worked at the Emporium in the 1930s. Samuel Waxman had his own business, too, and he had also worked at Myer's, but before his enlistment: 'He apparently did it by direct approach to Sidney Myer and as a result got a job', according to Waxman's son. 'They both spoke Yiddish to each other. Sidney Myer in those early days had a much more direct connection with his staff before he grew so big'.