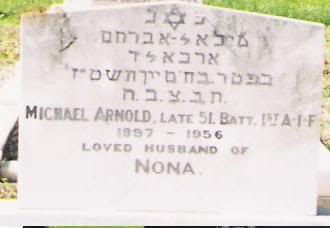 Arrived at Australia
from Shanghai, China
on 12.05.1915
per On Sang
disembarked at Fremantle, WA

Further indications of military command's approach towards the Russians may be found in courts-martial proceedings. Many disciplinary cases, such as 'using insubordinate language' (and army life made it easy for Russians to pick up that kind of 'language' quickly), made no reference to their Russian origin at all and the trials were unbiased. When Michael Nemirovsky abused a non-commissioned officer, for instance, the court sentenced him to 28 days of no. 1 field punishment, and commented that 'The Court are of opinion that there was provocation and recommend the accused to mercy'.

[...] The Myers were known for providing their compatriots with employment, among whom were several diggers -- Michael Nemirovsky was one who worked at the Emporium in the 1930s.