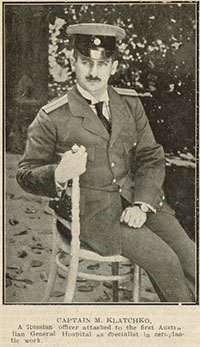 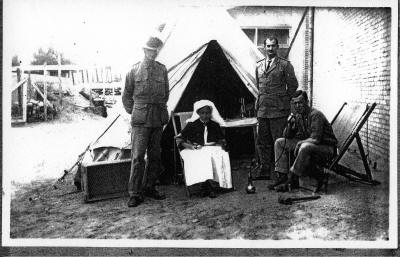 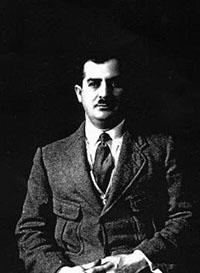 Arrived at Australia
from Egypt
on 16.09.1916
per Borda
disembarked at Melbourne

Residence after the war 16.12.1917 left Australia for Vladivostok, after 1921 lived with his family in Shanghai, visited Australia on many occasions

A life full of surprises - Klatchko/Klyachko/Клячко, by Tana on 'Find Russian Heritage'

A most unusual story was that of Michael Klatchko, a Russian doctor. On the eve of the war he left England aboard the German ship Lutzow, bound for the Russian Far East. At the outbreak of war the ship was in the Red Sea and the German crew immediately interned him on board. The British soon captured the ship, however, and Klatchko was landed in Egypt, where at first he was attached to the British army for duty with the medical units. In July 1915 he was transferred to the AIF and worked in No. 1 Australian General Hospital at Heliopolis and in auxiliary hospitals. He turned out to be a very skilled plastic surgeon, especially with the face and jaws. Many Anzacs evacuated from Gallipoli with severe head injuries experienced the benefits of his skill and his work was appreciated at the highest level. Lieutenant-Colonel Ramsay Smith, No. 1 Australian General Hospital's commanding officer, confirmed that 'His splendid surgical knowledge, his manual dexterity, and his mechanical genius, made his services invaluable to the wounded'. Major T.F. Brown, No. 1 Auxiliary Hospital's commanding officer, added: 'your keen desire to assist us in every way you could, reflects evidence of the good will of the Russian people towards us. We Australians are only a small portion of the British Empire, but I assure you we appreciate it very much.' Even the minister for Defence sent Klatchko official thanks for his services. In September 1916 he accompanied wounded soldiers being repatriated on the Borda and, once in Australia, was employed recruiting Russians across the country. His career ended quite unexpectedly and suddenly: in 1917 he ran off to Vladivostok with a girl from an upper-class Melbourne family.