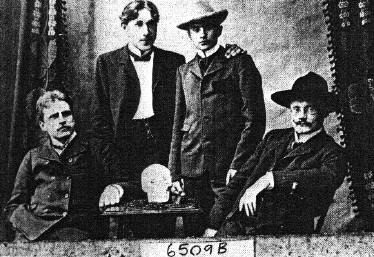 August Maren (second from the right) with his friends
From F.G. Clarke, Will-o'-the-wisp. Melbourne, 1983.

Residence before arrival at Australia Lived in London, was involved in Latvian political organisation 'Leesma'

Arrived at Australia
from London
on 7.03.1911
per Otway
disembarked at Fremantle, WA, with Dreger brothers and Sarah Ligum

Residence after the war Roleystone, WA

"I shall die in this cell". Russian's grievance against Australia. - The Advertiser, Adelaide, 1 September 1911, p. 9.

August Maren was [a] teacher who took up revolutionary activities in Latvia and wound up on active service in the AIF. He spent two years in a Latvian prison before moving to London, in 1909, where he was involved with the Latvian terrorist group Leesma, headed by Peter the Painter (Janis Jacklis). Leesma's group murdered three London policemen in the winter of 1910, which led to the sensational 1911 'Siege of Sidney Street'. Maren fled England for Western Australia, having been nominated as a migrant by his friend Ernest Dreger; he travelled out together with Dreger's brothers Frederick and Adolf from Latvia and Ernest's fiancée, Sarah Ligum, an 18-year-old Latvian Jewish woman whom Ernest had met in London. According to local police reports, tensions subsequently arose between Maren and Ernest Dreger over young Sarah, while they were working at a farm in Kellerberrin, Western Australia.

Dreger's daughter Elaine has a different version of events, however, claiming that at this time Ernest came into contact with some politically radical Latvians. 'Because he didn't agree with their views and so became a danger to them, they sought to rid themselves of him by selling him a gun that they had stolen and then informing the police. Although Ernest protested his innocence, he was gaoled at Rottnest Island prison for 3 months.'

In prison, an embittered Dreger told Australian authorities about Maren's connection with Leesma and Maren was arrested, amid rumours that he was the elusive Peter the Painter. Maren defended himself determinedly, and after a few months had to be released for lack of evidence. Assuming a new name, Peter Johnson, he put his past behind him, later dying in a traffic accident in Sydney in 1929.