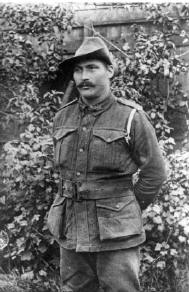 Residence before arrival at Australia Left Riga at 14 years of age and spent 4 years in France and Germany as apprentice brick maker. At 18 years joined a ship as a merchant seaman. Worked mostly as a stoker in the boiler room. Traveled to many countries of the world over ten years. Visited Australia in 1907 and returned to London (from memoirs of his daughter Elaine Dreger)

Arrived at Australia
from London
on 16.08.1909
per Port Chalmers
disembarked at Albany, WA

Occupation Fireman; after the war: farmer

"I shall die in this cell". Russian's grievance against Australia. - The Advertiser Adelaide, 1 September 1911, p. 9.

It was probably in [autumn 1917] that Ernest Dreger, the Latvian of German background who had become embroiled in the Peter the Painter story, won his Military Medal. Elaine Dreger, his daughter, explains the circumstances of his award: 'I remember we would ask how our father received the Military Medal for bravery during the First World War. He told us how the Australians were pinned down by some Germans from a particular vantage point. He went quite close and then ordered them to come out and charge. Because he spoke such good German and had a commanding voice the Germans charged out and were captured by the Australians. We would say "Wasn't that sneaky?" but he always maintained he always looked for prisoners and not bodies. On a second occasion the Australians were inadvertently being fired upon by the British forces. Our father volunteered to try to get across the no-mans-land and alert the allies to the situation. This he was successful in doing ... .' Dreger knew what he was fighting for: in Australia his wife was waiting for him with their three young children.