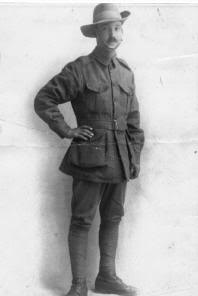 Arrived at Australia
from Russia via London
on 7.03.1911
per Otway
disembarked at Fremantle

Residence after the war Fremantle, Perth

Among other casualties [in spring 1918] there was Ernest Dreger's brother, Adolf Leopold Drager, wounded for the third time: this time he lost his leg. His niece Elaine Dreger tells how she remembers her father Ernest and her Uncle Fred talking about her Uncle Dolph losing his leg: 'As I recall, after the incident the medical team went through but Uncle Dolph was thought to be dead. On the third day the Salvation Army were still looking for survivors, and finding Dolph still alive brought him back. The leg had become fly blown but this was said to have saved his life because the maggots had eaten the rotten flesh and saved the wound from becoming gangrenous. Unfortunately, he had to be operated on three times so that finally he had a very high amputation.'