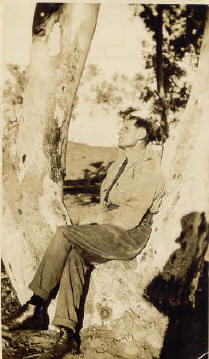 Residence before arrival at Australia Left home when 15 years old, was a sailor visiting all principal ports in the world

Arrived at Australia
from USA
on 25.03.1913
per Turan (Turraine)
disembarked at Port Adelaide, SA

For Greshner and Leoshkevitch the Gunda voyage was their first deep-sea sailing-trip, but others who ended up in Australia were experienced seafarers, like John Pankoff from Libava (now Liepaja, Latvia), who 'left home when he was 13, before the turn of the century and he never went back', as his son recalls. 'He left the Baltic on a Russian schooner taking pit props to South Shields for use in the coalmines of Northern England. ... Later he joined the crew of large square-rig ships sailing to all parts of the world. He went around Cape Horn seven times westward, eight times eastward on sailing ships carrying cargo to and from nitrate ports in Chile and Peru and wheat and wool from South Australian and Victorian ports. ... He could speak 10 languages with varying degrees of fluency. ... He had a very colourful life. People in the hotel were just buying beer to hear [his] stories.'

[...] With John Pankoff, from the story his son tells, we can see a similar divide in acceptance between those who knew him and those who did not. 'From when my father came to Ipswich he was an active member of the RSL. ... he always attended monthly meetings. I remember the time when Jim Finemore, an ex-POW of Changi, a dentist, and the mayor of Ipswich, drove my father home from a RSL meeting. It seems this night after the meeting when they were having some drinks at the bar, two chaps who had been in WW2 took exception to my father speaking in support of Russia. They took the law into their own hands and took the RSL badge from my father's coat saying that he was a Communist and should not be wearing the badge. This matter was brought up at a special meeting at the RSL and the two chaps were summoned to appear at this meeting and make a public apology to my father. A number of prominent members spoke in support of my father and one, Sir Jos. Francis, who was the Federal Member of Parliament, said that Jack Pankoff was a loyal Australian and member of the RSL and when times were bad during the Depression Jack Pankoff attended meetings when it was not always possible to get a quorum. I think my father's loyalty to the RSL had something to do with his being on an equal footing with other members who had a common memory of experiences in WW1. ... My father marched on Anzac Day in Ipswich and in his later years marched in Brisbane. At the parade in Brisbane he marched with men of the 8th Machine Gun Company and was the flag bearer. The last parade he attended was in 1956. Because it was raining he wore an old suit instead of the new suit he just had had made for him.'