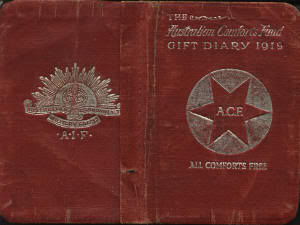 Residence before arrival at Australia England and America

Arrived at Australia
from America
on 25.04.1913
per Port Townsend
disembarked at Port Adelaide, SA

Occupation Seaman, after the war: tram guard; worked on wharves

My Grandfather, Berkeley Lambert, who died in the 1920's was in a Mortar Unit in France and it would appear that his life must have crossed Alexander Lembit's. My grandfather whilst gassed in France returned to Australia and brought back very little from the war other than some correspondence from his mother and an Australian Comforts Fund Diary dated 1919 - keeping in mind that the diary was produced well before the war was over. The diary contains very limited written information but it does refer to an Alexander Lembit leaving France to catch up with his wife and gives details of her address in Scotland. It also contains details of some of his friends and their addresses in both New South Wales and Scotland. This diary is actually Alexander Lembit's and for whatever reason my grandfather kept it with his papers on his return to Victoria Australia and, after his death in the 1920's, the diary was kept by my mother and subsequently given to me. Under Owner's Particulars there are details of hat, boot and collar sizes, his height and weight etc.