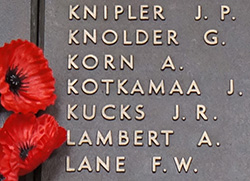 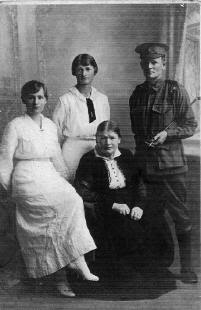 Arrived at Australia
from London
on 23.01.1900
per Orizaba
disembarked at Brisbane

Only a few Finns who had spent longer in Australia had wives here; apart from the small group of families that followed Matti Kurikka's charismatic leadership to north Queensland, Finnish families did not tend to migrate here. Kurikka wanted to found a Finnish colony in north Queensland at the beginning of the 20th century, and among these families there were at least three future Anzacs who arrived as young boys: Julius Nyman, Hjalmari Hannus and Johannes Kotkamaa. Ivy Hirmukallio, Kotkamaa's sister, has described some of her family's experiences.

The Kotkamaas arrived in Queensland in 1900 on the Orizaba and headed inland from Cooktown through the bush 'with a team of horses and a wagon, there were no roads whatsoever'. They reached Kurikka's settlement, 'which was only a sort of a tent camp. There were 3 or 4 young families and a group of young men.' Ivy's mother described Kurikka as 'a charming man and an idealist but not a business man'. When the colony foundered, the Kotkamaas decided to remain in Queensland, even though life was hard, rather than follow Kurikka to America, where he went to try and establish another colony.

'My father got work on the railway', Ivy related, 'and as he was always on the go we were left in the wilderness. A Chinese grocer would call once in every six months with groceries, and fruit he would give us for nothing. My brother who was 13 or 14 years of age always had a gun beside his bed and mother an axe. The naked blacks were taller than the ones in the south. They were very fond of visiting us and as persistent as any gipsy. They begged for flour, tea, sugar, and tobacco. ... Mother did not like to see such nakedness, and she had too many clothes, boots etc from Finland which she brought with her, so she would give them skirts, blouses, underwear, trousers, shirts, boots, neckties, hats and so on. ... The blacks thought mother was one of the best, we knew they would never harm us, also they would bring mother fresh fish and yams as they knew they would again get tobacco. ... Mother was very sorry to leave the north with all its hardships. My brother had made her an oven from a red ant termite hill, it was a perfect oven. My brother also had an instinct of finding wild honey in the gum trees. Best honey in the world.'

Perhaps it was these memories of his adopted country that nourished Johannes when, in only a few years, he would fight and die in far-off Flanders.