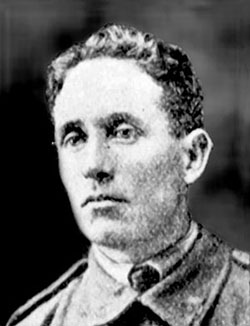 Arrived at Australia
from Antwerp, Belgium
on 20.12.1911
per Furth
disembarked at Port Adelaide, SA

For some Russian immigrants naturalisation was not just a formality: in joining the Australian army some really did want to be Australians. So, the denial of naturalisation to the men who went overseas to fight for Australia was especially harsh. In 1915 Jack Aloe, an Estonian seaman who settled in Australia in 1911, wrote: 'my intention is to enlist for active service as soon as I am accepted as a British subject'. In a week he received the formal response that he was 'not eligible to apply for Commonwealth naturalization at the present time'. Nevertheless, he joined the AIF, was wounded three times and, in the name of the nation which rejected him, made his supreme sacrifice in the battle for Péronne almost at the end of the war.