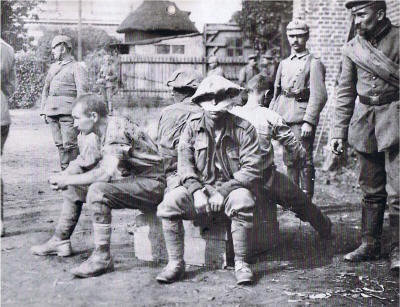 Arrived at Australia
from London
on 5.04.1913
per Orontes
disembarked at Adelaide

Application for admission of friends (NAA)

[Prisoner of war] Andreas Voitkun [...] who left his Latvian-born wife and five children at Port Pirie, was not naturalised but seems to have had no hesitation in identifying himself as an Australian: 'I am an Australian', he says, 'and a good bit from home'. This is how his 'comrade', an English fellow-prisoner, also sees him: 'There is here an Australian married with a family of 5 children who speaks German, Russian and French', he writes to his sister. 'He acts as interpreter for us English to the Russian Doctors and so in an indirect way is doing his bit to better the lot of us wounded.' Voitkun himself was severely wounded and was in hospital initially at Ohrdruf in Thüringen with British and Russian prisoners-of-war.

My first ten years in Australia were fairly hard. There was hardly any industry because everything was imported from abroad, especially England, and so work was hard to find because frankly there wasn't any work. One had to take whatever was available. I settled in the small town of Port Pirie. There were more than 25 Latvians working in the lead and oilier metal smelters. Except for myself and one other Latvian family they were all so called lost sons (seamen). A few married local girls but the majority remained bachelors until they died. [...]

In 1914 war broke out. I had served in the Russian army and was classified as a Russian army reservist. We had planned to return to our homeland after ten years where I would have been regarded as a refugee if all had been as before without a revolution. The Russian government announced that all Russian army reservists who found themselves abroad could join any Allied army and would then be regarded as having served in the Russian army. In 1915 I joined the Australian army and served until the end of the war in Egypt, France and Germany and then from England returned to Australia. I was not the only one. There was a fairly large number of Latvians because from the casualty lists of fallen and wounded one came across many Latvian names such as Kalniņš, Bērziņš and so on. Of course at that lime we were all regarded as Russians because a Latvian government did not exist . . .

The 32nd Battalion was one of a number of Australian units that took part in the disastrous offensive at Fromelles, 19 July 1916, and suffered heavy casualties. Voitkun was wounded by shrapnel in the right leg and left arm, and taken prisoner by the Germans. He ended up in Ohrdruf Camp, Thuringia, where, because of his facility in several languages, he acted as interpreter for the camp doctor, thus ensuring a less harsh regimen than that endured by most POWs. His position must have given him some privileges, because after complaining that the white bread sent in parcels from the British Red Cross in Switzerland was not to his liking, arrangements were made for rye bread to be sent in from Sweden. While the stomach was satisfied, at least to some extent, he nurtured the mind by reading Tolstoy's War and Peace, a book that he retained and read annually until just before his death.