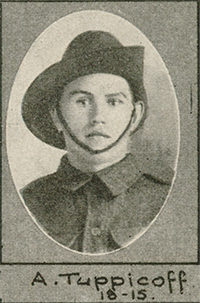 Residence before arrival at Australia Lived in Manchuria for 12 years, served in the Russian Army (artillery)

Arrived at Australia
from Russia
on 16.03.1914
per Empire
disembarked at Brisbane

[...] On 31 May [1917] the Allies launched a seven-day bombardment of the German positions, followed by a series of explosions set off in tunnels beneath the German lines, before the attack started on 7 June. A lot of Russian tunnellers were involved in the mining of the trenches, and other Russians in the attack. In this engagement Alexis Tupicoff received a severe facial wound, leaving him with a disfigured nose, mouth and throat.

[...] Some of them [...] believed that in Russia they would be able to manage better: they were suffering from their wounds and the only employment they could find in Australia involved hard physical work. Alexis Tupicoff (who was severely wounded at Messines), for instance, argued in his application to the Repatriation Department in April 1918, 'I cannot get light work here and my family is there. The work I have now in Ipswich workshops is too hard for me.' In Samara, where he wanted to go, in the hope of finding work in an office or on a farm, 'I have my friends who will assist me'. The department rejected his application on the grounds that 'he proposes to go to a country which is at peace with the enemy'.