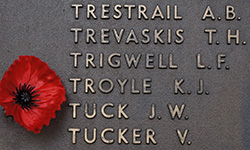 Hjalmar Karhu, a Finnish former seaman from Western Australia, gave his account of what he called 'the first "stunt" at Bullecourt' [1917], in which he was wounded as he tried to retreat. 'We reached the second line of enemy trenches. "Fritz" counter-attacked us and our bombs ran short. Our chaps were retreating, and I tried to get back to our lines.' The wounded Karhu was captured by the Germans. Another four Russians were also captured on the same day: three other Finns -- Matti Harsila, Konrat Troyle and Frans Fredrikson -- and Charles Reppe, from Riga, who was one of the first Russians to enlist.

[...] [As prisoners of war in their letters to the Australian Red Cross] they did not mention the empire by name, but what they said was no less important. Vladimer Valichea and Konrat Troyle requested Australian battalion colours and badges. [...] Troyle wrote, explaining to Miss Chomley why he was asking for more tobacco, 'it almost seems presumption on my part to want more but there are other Britishers here with me who are not so fortunate as me regarding tobacco and it's not possible to refuse a comrade a smoke'. Two months after writing this Troyle was dead; a victim of influenza, he died in October 1918 on Rügen, an island off the German coast in the Baltic Sea.