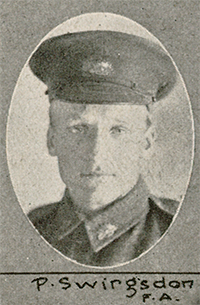 Arrived at Australia
from London
on 16.07.1910
per Durham
disembarked at Townsville, Qld

Moreover, some Russians considered that taking an oath of allegiance to the king at enlistment dispensed with the need to take another oath for naturalisation -- in the words of Peter Swirgsdin, who had been severely wounded at Passchendaele in 1917: 'I have taken the Oath of Alligian to His Majesty the King once and I consider it true for all times'.