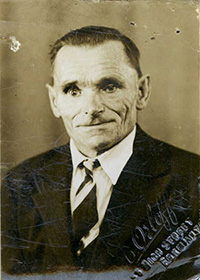 Arrived at Australia
from South America (?)
on 20.03.1913
per Marie
disembarked at Geraldton

On 25 September [1918] two sappers from the 3rd Tunnelling Company -- Denis Papchuck, a Russian with a faultless service record, and his Australian comrade T.W. Johnson -- refused to get into a lorry that was to take them to the trenches, without their paybooks, arguing that they were acting in accordance with company orders. They were court-martialled together and, finally, given suspended sentences.

[...] some Russians considered that taking an oath of allegiance to the king at enlistment dispensed with the need to take another oath for naturalisation -- in the words of Peter Swirgsdin, who had been severely wounded at Passchendaele in 1917: 'I have taken the Oath of Alligian to His Majesty the King once and I consider it true for all times'. One of the last of these Russians to take out naturalisation papers (in 1952), Denis Papchuck, was reported as expressing similar sentiments: 'Having served with the A.I.F. in France and Egypt for three and a half years and been gassed and wounded, ... said he had regarded his honourable discharge as sufficient proof of naturalisation'.