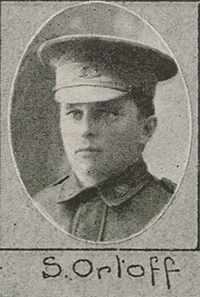 Arrived at Australia
from Vladivostok
on 8.12.1912
per Nikko Maru
disembarked at Brisbane

But let's spend a little longer listening to the voices of these Russian swaggies as they emerge from the documents. 'In 1922 I left my discharge with my swag at Babinda Railway station North Queensland and the whole of goods which I had in my swag was stolen by some person unknown.' This is Steven Orloff -- another whose life took many different turns. At Ypres he was severely wounded, on the same day as Ankudinow, and invalided back to Australia. On his return, Orloff supported Leo Berk's anti-bolshevik group even though before the war he had raised money to send to political prisoners in Russia and even though, in 1921, he is found on Simonoff's repatriation list. He did not go back to Russia, however, and ended up sundowning in Queensland and New South Wales. In 1947, when applying for naturalisation, he still had no permanent address, being apparently camped out at La Perouse, Sydney.