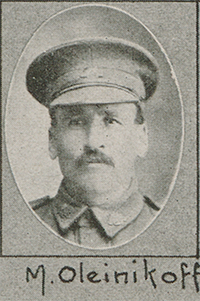 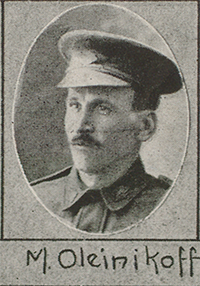 Arrived at Australia
from Moscow
on 4.09.1912
per Eastern
disembarked at Brisbane

About 1912 some ethnic Russian families took up farming land in the sugar-cane area around Cordalba, Queensland. The heads of three of these families were friends and had previously served in the Russian army. Two of them subsequently enlisted in the AIF: 36-year-old Matfeus Oleinikoff (who had eight children), and 33-year-old Feodot Peachenoff (who had one daughter). The third one, Stephen Platonoff, was too old to fight but his two sons Thomas and George enlisted instead.