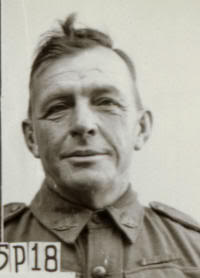 Arrived at Australia
from Marseilles, France
on 16.07.1914
per Japanese ship
disembarked at Fremantle, WA

But the winter of 1916-17 was not all grim. The trenches became the soldiers' home and their comrades became their family. Soldiers took their leaves in Paris and London, attended training schools, and had unusual encounters -- I mention just two. [...] Another meeting was described in the West Australian under the heading 'Former workmates meet. An incident of Bullecourt'. It said, 'A soldier recently returned from France states that at Bullecourt he was watching a batch of prisoners being brought in, when one of them addressed him by name and asked for a drink. On looking more closely he saw that the prisoner was a man with whom he had worked on a mine at Boulder in December, 1915. The question arises as to how the German got away from Australia to Germany.' This incident attracted the attention of the Australian Intelligence authorities and the Western Australian police carried out a special investigation. The Australian soldier in question was Wladyslaw Nogal, a Russian Pole; while working at Horseshoe Gold Mine in Kalgoorlie in July or August 1914, Nogal met the German, who disappeared shortly thereafter. The next time Nogal saw him he was in a group of German prisoners-of-war at Goodincourt, the Somme, in January 1917. 'The German noticed him', said the police report, and called out "What oh! Victor! What about giving me a drink of tea?" Nogal states he made no reply.'

... At the two-up or in showing hatred to a German former workmate -- they were becoming part of their army.