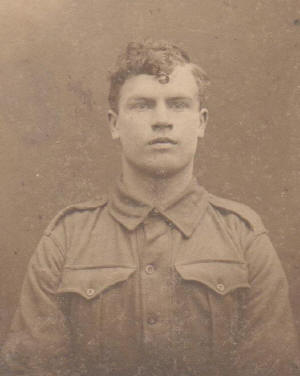 Arrived at Australia
on 1911

Naturalisation Served as Russian subject; by 1939 was naturalised British subject

Men of the 45th Battalion, following close behind a creeping artillery barrage, which is sweeping the enemy positions in front of Ascension Farm, near Le Verguier. E03248 (AWM)

During [August 1918] Australian units continued their 'peaceful penetration', gradually pushing back the Germans towards the old Somme lines of 1916, in actions that often turned into fierce battles. Two such attacks are described in the citations for the Military Medals received by Corporal Nicholas Lagutin, from Moscow, who was a labourer when enlisting, and Corporal Emerick Schimkovitch, a former sailor from Lithuania. During the battle near Lihons Lagutin 'was in charge of a bombing block within 25 yards of the enemy. On the evening of the 16th [of August] the enemy under cover of showers of bombs and rifle grenades made four distinct attempts to rush the post. Owing to the bravery and determination of this N.C.O. each attack was beaten off with loss to the enemy. He organized his bombers very skilfully and harassed the enemy unceasingly.'

[...] The process of becoming Australian manifested itself in different ways. In 1918 Nicholas Lagutin was a corporal exhibiting great bravery and determination in the fighting at Lihons, for which he received the Military Medal; by 1939 he was president of Waverley's fishing and angling club in Sydney -- a position suggesting he had put down deep roots in Australian society. Indeed, married in England, he worked in Sydney as a tram conductor and, his police report stated, was 'not member of any foreign club, and does not associate with foreigners'.