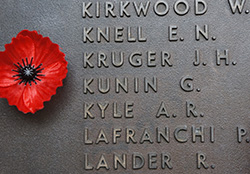 Arrived at Australia
from London, England
on 19.04.1914
per Port Macquarie
disembarked at Melbourne

Gregory Kunin, a Byelorussian who enlisted as a carpenter and seaman, was on outpost duty in a pill-box at Westhoek Ridge. He and nine other men were killed on the eve of the advance when 'An H.E. shell exploded on top of the pill box', according to his comrades: '... we dug out three bodies, those of Kunin, Cox and L/Cpl Northcote and the unrecognisable remains of the others, the men having been blown to pieces'. They were buried together with a cross over their grave, even though Kunin was a Jew. Ben Goffin, another Russian Jewish serviceman, enlisted and served with Kunin, of whom he wrote: 'He was a little dark fellow, full set, black curly hair. He was a great friend of mine.'