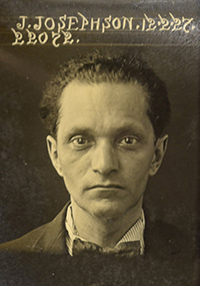 Arrived at Australia
from London
on 9.09.1912
per Scharnhurst
disembarked at Fremantle, WA

Another perspective on the mistreatment of the Russian Jews, and Russians in general, is provided by the case of Joseph Josephson, a Lithuanian Jew. Josephson also was driven to desert but he had been with his unit much longer than Platkin and Bell (he was in the 1st Battalion, on the Western Front from March 1917 to August 1918), and stated at his court-martial: 'I was several times entrusted with very important work by NCOs. I was Brigade [German] Interpreter, and have also done observation work.' An officer from his brigade testified that 'He was keen on his work and of excellent behaviour'. Josephson was wounded twice (at Bullecourt and Passchendaele): 'The second time I was wounded', he said, 'I got to England and the Russian Government made an armistice. The men in Camp teased me about being a Russian.' On his return to his battalion he applied for a discharge, but without success as the colonel 'had no sympathy with' him. In August 1918 he told his platoon commander Lieutenant W.J. Johnston that 'he could not see his way to go into the line, ... that his country were neutral and he might be fighting against his own relatives'. Josephson added, 'and when he [Johnston] threatened he would shoot me if I refused to join the line, my mates told me that was bluff. When the Colonel refused to parade me before the Brigadier I felt justified at not going into the line. My mates encouraged me. I left the battalion.' He was sentenced to 18 months' imprisonment with hard labour, but in a few weeks the sentence was suspended and Josephson was returned to Australia 'for discharge (other reasons)'.

What is important here is how different the attitude was towards him at the depot in England, on the part of men there who had not seen him in action, compared to the response at his battalion in France of his 'mates', who were obviously on his side in his struggle to obtain a discharge after Russia's withdrawal from the war.