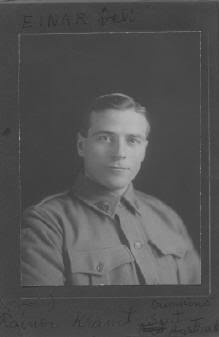 Arrived at Australia
from Finland
on 2.04.1911
per Dangy
disembarked at Port Pirie, SA

Residence after the war 1920 visit to the UK; Cummins, SA

Passage to Australia for wife (NAA)

Matti Lautala and his first wife Vilhelmina had 12 children, many of them died in childhood. Einar was the 7th child. (Pentti Jokinen, Einar's nephew)

Einari/Rainer is a part of our family history of rule of law and occasional dissidence. The family name Lautala refers to an occupation, a member of the jury. High ethical standards were not always liked by the establishment, kings and tyrants.

Einari Lautala was a very strong-headed person. He was a witness in a murder case. Other witnesses were pressured to change their stories, as the assailant had money and a high position. Only he and an older man stuck by the truth. The police renamed him and gave him a new passport, and they looked the other way when he left Finland. Supposedly their words were: 'As you are so strong-headed and do not give up, will give you an appropriate name. You are now Mr Granit'. Rainer means "pure", as innocent, in German. So, whoever gave the name Rainer Granit, was very intelligent, well-educated and knew that Einar was an innocent witness telling the truth.

Mr Granit/Lautala could have returned to Finland 10 years after the incident, but he probably did not know the law that well. However, he came back at least once as a tourist and brought a car with him, which impressed his sister Kaarin.