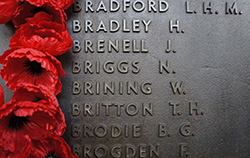 Arrived at Australia
from South America
on Ca 1917