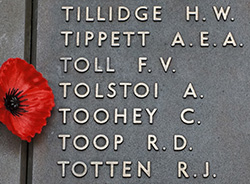 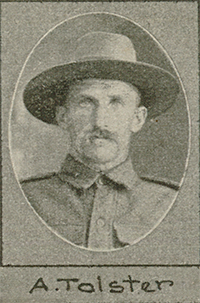 Residence before arrival at Australia Was well educated in France, served in the French Army

Arrived at Australia
from Spain
on 12.03.1900
per Windsor
disembarked at Wollongong, NSW

Overpayment to Widow of A. Tolstoi (digitised file) (NAA)

Boolboonda. Development of the field. - The Bundaberg Mail and Burnett Advertiser, 1 December 1909, p. 4.

Andre Tolstoi, born in Warsaw but brought up in France, had served in the French army before enlisting in the AIF. After he was reported missing in action at Bullecourt, his comrades stated at the court of enquiry that his body bore the scars of several wounds received in other wars. [...] His wife Agnes for a long time refused to believe that he was dead, hoping that he had been taken prisoner -- but he never returned.