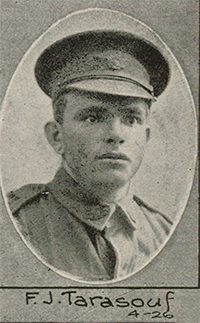 Religion served as Roman Catholic (?), was in fact Russian Orthodox*

In Thomas Tarasowf's case refusal [of naturalisation] was because of several convictions for stealing while drunk. Yet his police report stated that he was 'undoubtedly a Russian' who did 'not mix with the Russian community here'; even his referees were all returned soldiers. When he applied, he was already terminally ill with tuberculosis but, not being a citizen, was ineligible for the invalid pension. The RSL came to his support several times, writing once: 'there is a principle behind it, and it seems remarkable that a man who fought for his country, cannot subsequently be naturalised'. Officialdom remained adamant. The policeman interviewing him for the last time, when he was not expected to live much longer as he was 'daily growing weaker from TB', recorded that Tarasowf 'Desires to state that he wishes to die a British Subject'. That finally moved the authorities and Tarasowf, after battling for five years, was naturalised in 1936; soon afterwards he died, but at least it was as a British subject