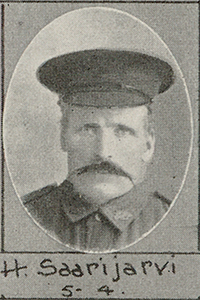 Arrived at Australia
from Norway
on 24.03.1902
per Serena
disembarked at Melbourne

Adolf Saarijarvi, a Finnish selector from Chinchilla, Queensland, was in a 4th Pioneer Battalion working-party in this battle [Villers-Bretonneux, 1918] and it was one of those occasions when pioneers had to take up their rifles and fight. Saarijarvi 'displayed great courage and presence of mind', his commanding officer wrote; 'he continuously placed himself in position from which effective fire could be made from his rifle and passed messages to Lieut Reid and those about him so that men in the vicinity could be used to the best advantage'. His actions on this day won Saarijarvi a Military Medal but he did not live to see victory: wounded in August 1918 in the advance on Amiens, he died from influenza in October 1918 in England, with his Finnish wife at his side -- they had married just a month before his death.