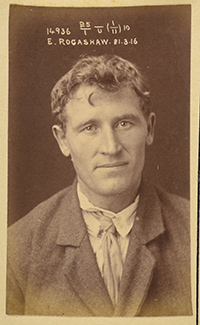 Residence before arrival at Australia Served in the Russian Cavalry on the Afghan border, in 1910-1911 was in Afghanistan and India

Arrived at Australia
from Calcutta, India or Singapore
on 14.04.1911
per Paroo
disembarked at Fremantle, WA

The military authorities in Kalgoorlie were especially vigilant when enlisting Effim Rogoshow. To prove his Russianness, he provided a unique document: it was a note written in old-fashioned Russian by a half-literate countryman from Kalgoorlie and stated that Rogoshow is 'A true Russian man'. It obviously satisfied the officials and they duly attached the 'proof' to Rogoshow's file.