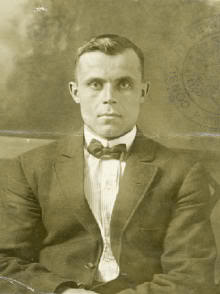 Arrived at Australia
from Finland
on 12.05.1915
per Port Macquarie
disembarked at Sydney

An over-suspicious attitude on the part of one was often counterbalanced by commonsense from others. In August 1916 Major Hogan, from [...] machine-gun depot at Seymour, reported about Dossoeff and Raisanen, two privates in his unit who 'are supposed to be Russian subjects ... These men simultaneously asking for transfer from Machine Guns to Artillery and Light Horse struck me as being peculiar, and I thought possibly they may be Enemy Agents.' He added, probably feeling he was making too much of it, 'I forward this information for what it worth'. The Intelligence officer who had to deal with this 'information' did not seem particularly concerned about them: 'The fact that both of them applied for a move at the same time would not mean anything as they evidently talked the matter over together and both came to the same conclusion'. The irony of this situation was that any contact between them would be highly unlikely: one, the smelter-man Moysey Dossoeff, was an Ossetian from the Caucasus; the other was a Finn, Otto Abram Raisanen, a former butcher who had enlisted just three days after his arrival in the country.

[...] Details of the hardships experienced by these Russians working their land [after the war] sometimes turn up in archival documents where you least expect to find such information -- which is how we learn of Otto Raisanen's trials at his farm on Black Mountain Road, near Cooroy (Queensland). [...] Having been three times a casualty on the Western Front earned him the privilege of becoming an Australian and it is from his naturalisation application that we learn: 'I lost my dwelling [by fire] and all my property ... whilst burning off a felled area of scrub on my farm on October 14, 1920'. A sense of his isolation can be gleaned from another letter he wrote to explain why he hadn't collected his service gratuity: 'Being then in the back-blocks engaged in pioneering a farm, beset with many worries and difficulties and also not being in regular touch with the outside world at the time when Gratuity money became due, it could have escaped my knowledge'.