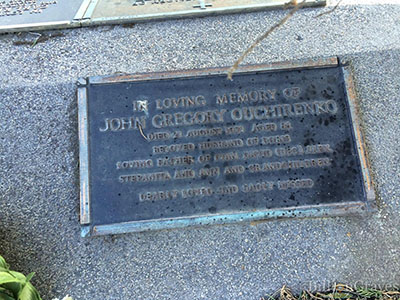 Arrived at Australia
from USA
on 01.1915
per Boorel
disembarked at Melbourne

Ann Ziguras, Down through the years: Flags fly for heroes, Sunraysia Daily, 2016

The story of engineer John Ouchirenko, which shows the strain both parties experienced sometimes, emerged from Ouchirenko's evidence at his court-martial, when charged with over-staying his leave in England. 'I was married to an English girl on 5 June 1917, with the consent of the girl's parents. Some time later the girl's parents took exception to me and when I arrived on leave refused to let me know of my wife's whereabouts.' Previously, while in France, Ouchirenko had received letters apparently 'signed by my wife stating that she did not wish to have any more to do with me. These letters affected me so much that I attempted to commit suicide but was stopped by my C.O. who especially gave me leave to come over and investigate matter. ... I was so distracted by the way I was treated by my wife's people ... that I really did not know what I was doing.' He suspected that his Russian origin was the reason for such treatment. He was in hospital when his wife Clara found him herself and it turned out that the letters had been forged by her family. The court, like Ouchirenko's commanding officer in France, was very lenient with him and Ouchirenko just forfeited a fortnight's pay. The story did not have a happy ending, however. Clara had a child but did not return with him to Australia, and later cancelled a free passage to Australia that Ouchirenko had organised through the military authorities. Luckily, he subsequently married an Australian girl, with whom he had a family.