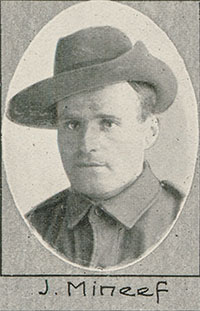 Arrived at Australia
from Russia
on 24.07.1910
per Yawata Maru
disembarked at Brisbane

John Mineeff, born in the Urals, an iron-moulder at enlistment, served as a gunner and driver in artillery with the 1st AIF and was invalided back to Australia suffering from shell-shock. He later married but did not live long. When the new war broke out, his two sons and daughter all joined up. His second son, Lex (Alexis Charles), served in the RAAF in England as a wireless operator on Lancasters; in June 1944 his plane failed to return from a bombing mission over northern France. His plane was subsequently found just north of Amiens, not many miles from where, on the other side of Amiens, his father had endured the horror of the Somme in the autumn of 1916.